ABOUT PASTOR ROD AND NICOLE 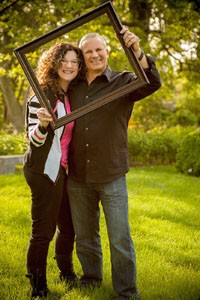 Pastor Rod Lott and Nicole married in 1992 and that’s when an already rocky relationship became even more turbulent. After 10 years of unhealthiness and heartache they admitted that trying to save their marriage was hopeless so they agreed to file for divorce. They both learned the hard way how important it is to guard the heart…above all else.

Little did they know that God had a powerful plan for reconciliation and salvation! About 7 weeks before their divorce was finalized, God restored their broken marriage and their broken hearts and their broken lives! Neither grew up in the church and neither had any deep concept or true understanding of God and/or religion so adopting a Christ-centered lifestyle was foreign to them. In addition, the road leading to relational healthiness was really tough at times as they battled resentment, lack of trust, and a lot of insecurity.

They can totally relate to the Exodus account of the Israelite’s paralyzing fear to proceed into the Promised Land and the Israelite’s innate desire to return to Egypt. Pastor Rod and Nicole were in completely uncharted territory. Neither felt they had the tools necessary to overcome such large obstacles. Through much trial and error and with the guidance of the Holy Spirit, they eventually learned the many skills needed to have a healthy satisfying marriage.

Today, as peace-filled Christians, they recognize their ongoing need for a Savior EVERY day. Pastor Rod and Nicole are simply sinners who are surrendered to God and miraculously redeemed! They enjoy teaching people of all ages how to guard their heart and avoid heartbreak and pain. If you are single, they would love to teach you how to really get to KNOW someone and avoid falling in love with a jerk or jerkette. If your marriage is stable, they would be thrilled to help you grow your love for one another. If you’re experiencing marriage problems or are even in crisis, they will encourage you and speak truth into your life—they firmly believe there is absolutely NO marriage too broken or too damaged for God to redeem and completely restore. That’s right—every marriage is redeemable.

Pastor Rod and Nicole feel called “to give light to those who sit in darkness…” (Luke 1:79a) and they are committed to educating people of all ages about the science behind relationships and science behind the sin of sexual immorality. Pastor Rod was a high school Science teacher and football coach for many years prior to his commitment to full-time ministry. Now, together, Pastor Rod and Nicole explain how science plays a significant part in God’s command to “Guard your heart, above all else.” Their ability to be authentic, practical, and down-to-earth allows them to make instant connections with people, particularly with hurting people.

In addition to his calling at Guard the Heart Ministries, Pastor Rod has a passion for both Discipleship Ministry and Men’s Ministry. In 2013, Rod graduated with a seminary master’s degree in Christian Leadership from Liberty University Theological Seminary, retired from teaching, and was ordained as Discipleship Pastor at his home church.

Currently, he is leading a radically intimate, discipleship-focused church (Heartland Bible Church) which is modeled after the church described in the book of Acts, chapter 2, where the followers of Christ met for fellowship in homes. He specifically enjoys teaching God’s Word and coaching men to be the spiritual leaders of their household.

Pastor Rod and Nicole’s love and passion for Jesus Christ is contagious and God uses that passion to draw people into a closer relationship with Himself. Pastor Rod and Nicole have 3 children but their 2 oldest sons are married now so they currently only have their college-aged daughter living at home with them.